*Breaking* RBA Cash Rate has held at it’s lowest ever 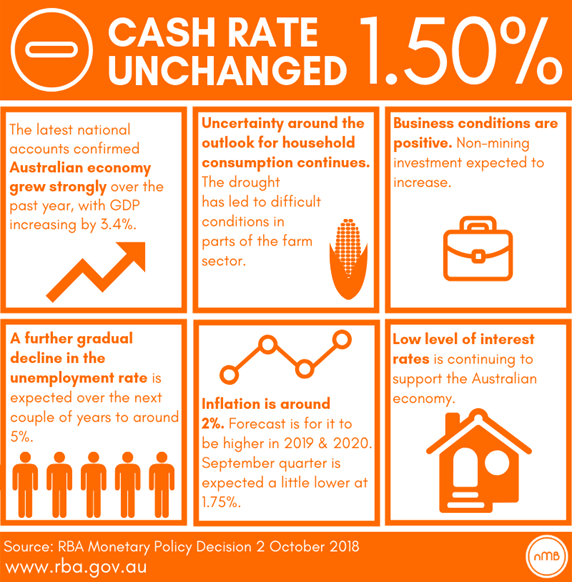 For 24 continuous months the Cash Rate has held at it’s lowest ever rate of 1.50%.

The global economic expansion is continuing. A number of advanced economies are growing at an above-trend rate and unemployment rates are low. Growth in China has slowed a little, with the authorities easing policy while continuing to pay close attention to the risks in the financial sector. Globally, inflation remains low, although it has increased due to both higher oil prices and some lift in wages growth. A further pick-up in inflation is expected given the tight labour markets, and in the United States, the sizeable fiscal stimulus. One ongoing uncertainty regarding the global outlook stems from the direction of international trade policy in the United States.

Financial conditions in the advanced economies remain expansionary, although they are gradually becoming less so in some countries. Yields on government bonds have moved a little higher, but credit spreads generally remain low. There has been a broad-based appreciation of the US dollar this year. In Australia, money-market interest rates are higher than they were at the start of the year, although they have declined since the end of June. In response, some lenders have increased their standard variable mortgage rates by small amounts, while at the same time reducing mortgage rates for some new loans.

The latest national accounts confirmed that the Australian economy grew strongly over the past year, with GDP increasing by 3.4 per cent. The Bank’s central forecast remains for growth to average a bit above 3 per cent in 2018 and 2019. Business conditions are positive and non-mining business investment is expected to increase. Higher levels of public infrastructure investment are also supporting the economy, as is growth in resource exports. One continuing source of uncertainty is the outlook for household consumption. Growth in household income remains low and debt levels are high. The drought has led to difficult conditions in parts of the farm sector.

Australia’s terms of trade have increased over the past couple of years due to rises in some commodity prices. While the terms of trade are expected to decline over time, they are likely to stay at a relatively high level. The Australian dollar remains within the range that it has been in over the past two years on a trade-weighted basis, but it has depreciated against the US dollar along with most other currencies.

The outlook for the labour market remains positive. The unemployment rate is trending lower and, at 5.3 per cent, is the lowest in almost six years. The vacancy rate is high and there are reports of skills shortages in some areas. A further gradual decline in the unemployment rate is expected over the next couple of years to around 5 per cent. Wages growth remains low, although it has picked up a little. The improvement in the economy should see some further lift in wages growth over time, although this is likely to be a gradual process.

Inflation is around 2 per cent. The central forecast is for inflation to be higher in 2019 and 2020 than it is currently. In the interim, once-off declines in some administered prices in the September quarter are expected to result in inflation in 2018 being a little lower than otherwise.

nationwide measures of rent inflation remain low. Growth in credit extended to owner-occupiers remains robust, but demand by investors has slowed noticeably as the dynamics of the housing market have changed. Credit conditions are tighter than they have been for some time, although mortgage rates remain low and there is strong competition for borrowers of high credit quality.

The low level of interest rates is continuing to support the Australian economy. Further progress in reducing unemployment and having inflation return to target is expected, although this progress is likely to be gradual. Taking account of the available information, the Board judged that holding the stance of monetary policy unchanged at this meeting would be consistent with sustainable growth in the economy and achieving the inflation target over time.