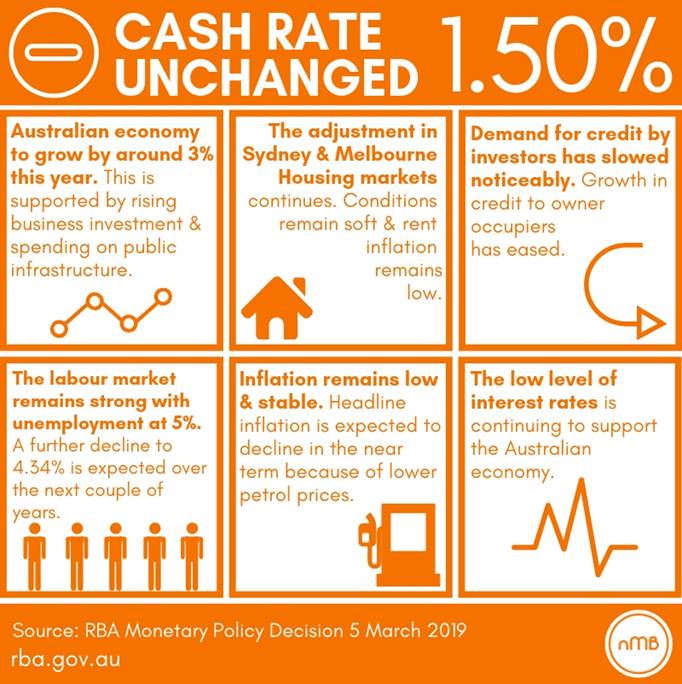 Could interest rates be on the way down?

The global economy grew above trend in 2018, although it slowed in the second half of the year. The slower pace of growth has continued into 2019. The outlook for the global economy remains reasonable, although downside risks have increased. The trade tensions remain a source of uncertainty. In China, the authorities have taken further steps to ease financing conditions, partly in response to slower growth in the economy. Globally, headline inflation rates have moved lower following the earlier decline in oil prices, although core inflation has picked up in a number of economies. In most advanced economies, unemployment rates are low and wages growth has picked up.

Overall, global financial conditions remain accommodative. They have eased recently after tightening around the turn of year. Long-term bond yields have declined, consistent with the subdued outlook for inflation and lower expectations for future policy rates in a number of advanced economies. Also, equity markets have risen, supported by growth in corporate earnings. In Australia, short-term bank funding costs have moderated, although they remain a little higher than a few years ago. The Australian dollar has remained within the narrow range of recent times. While the terms of trade have increased over the past couple of years, they are expected to decline over time.

The Australian labour market remains strong. There has been a significant increase in employment and the unemployment rate is at 5 per cent. A further decline in the unemployment rate to 4¾ per cent is expected over the next couple of years. The vacancy rate is high and there are reports of skills shortages in some areas. The stronger labour market has led to some pick-up in wages growth, which is a welcome development. The improvement in the labour market should see some further lift in wages growth over time, although this is still expected to be a gradual process.

Other indicators suggest growth in the Australian economy slowed over the second half of 2018. The central scenario is still for the Australian economy to grow by around 3 per cent this year. The growth outlook is being supported by rising business investment, higher levels of spending on public infrastructure and increased employment. The main domestic uncertainty continues to be the strength of household consumption in the context of weak growth in household income and falling housing prices in some cities. A pick-up in growth in household income is nonetheless expected to support household spending over the next year.

The adjustment in the Sydney and Melbourne housing markets is continuing, after the earlier large run-up in prices. Conditions remain soft in both markets and rent inflation remains low. Credit conditions for some borrowers have tightened a little further over the past year or so. At the same time, the demand for credit by investors in the housing market has slowed noticeably as the dynamics of the housing market have changed. Growth in credit extended to owner-occupiers has eased further. Mortgage rates remain low and there is strong competition for borrowers of high credit quality.

Inflation remains low and stable. Underlying inflation is expected to pick up over the next couple of years, with the pick-up likely to be gradual and to take a little longer than earlier expected. The central scenario is for underlying inflation to be 2 per cent this year and 2¼ per cent in 2020. Headline inflation is expected to decline in the near term because of lower petrol prices.

The low level of interest rates is continuing to support the Australian economy. Further progress in reducing unemployment and having inflation return to target is expected, although this progress is likely to be gradual. Taking account of the available information, the Board judged that holding the stance of monetary policy unchanged at this meeting would be consistent with sustainable growth in the economy and achieving the inflation target over time.